WHoa!!
I saw this article on Yahoo News - it's buzzing everywhere.
A 24 year old man requested to be kept upright for his funeral.

Here's the article:
SAN JUAN, Puerto Rico - A Puerto Rican man has been granted his wish to remain standing — even in death. A funeral home used a special embalming treatment to keep the corpse of 24-year-old Angel Pantoja Medina standing upright for his three-day wake.

Dressed in a Yankees baseball cap and sunglasses, Pantoja was mourned by relatives while propped upright in his mother's living room.

His brother Carlos told the El Nuevo Dia newspaper the victim had long said he wanted to be upright for his own wake: "He wanted to be happy, standing."

The owner of the Marin Funeral Home, Damaris Marin, told The Associated Press the mother asked him to fulfill her dead son's last wish.

Pantoja was found dead Friday underneath a bridge in San Juan and buried Monday. Police are investigating. 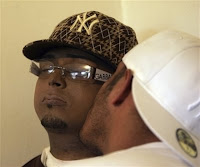