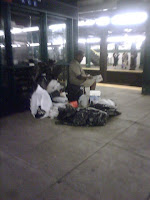 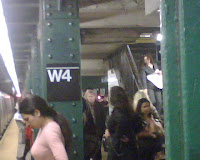 So it seems like this is my week to interrupt people and birds on the train.....
As I transferred for the F train this morning ...I felt like I stepped into some one's
living room and/or kitchen....

On Sunday evening ,, I was headed to Manhattan and while waiting for the A train...I apparently interrupted some birds...
have a look...

(I'm not sure why I see the strangest things on the train or waiting for a train...maybe it's me or maybe it's the city)

Hellllo blog readerz,,,,
Happy Sunday!
I was surfing through some youtube videos and I came across
a video by a violinist (yea that's typical).
But!!!! the thing that shocked me was
the song she was covering,,,,, it was Beyonce's "Lost yo' Mind" (I love that song!!) ---
So I clicked on the video and OMG!
I can't stop watching it...this girl is amazing (jaslady87) check out this video and some of her other violin covers (Alicia Keys, One Republic, Amy Whinehouse)..
ah!! !!!!

Posted by Tameeka Time at 3:32 PM No comments:

Email ThisBlogThis!Share to TwitterShare to FacebookShare to Pinterest
Labels: I'm a fan

This morning I was riding the train and I kept noticing some passengers that entered on the far end would stop ---- look at some empty seats ------ then scurry towards my way,,,

After the 3rd time I stretched my neck out to see what was going on and there was a homeless man sleeping.

From what I could see, he had an injured foot and had urine flowing from seat to seat next to him.

So,,, two stops later, 3 police officers enter the train and did nothing!!!!! They did not even look or turn towards him!

*I thought they would at least help him, talk to him, see if he's alive ,,,,something!

Anywayz, I get close to my destination .... the police have left, and the train empties out and I see a young woman go up to the man, wake him up, give him a couple of dollars, her breakfast, and a business card.

*hopefully she was able to help this man out -- even if it was just with coffee.

The photo below features one of the officers chatting and the homeless man sleeping behind her. 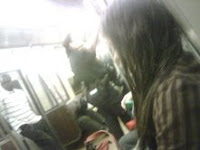 When strippers attack... wait I likey!

After browsing some video podcasts on itunes I came across a show titled:
Stripper Method. It's a video podcast about 2 female strippers who've retired. They are now mothers, business owners, and house wives but still want to keep up and share their stripping skills. I've only watched 2 episodes so far but I think the show is great!!
The format is well thought out and entertaining...did I mention they promote stripper shoes on the show...lol (this was a little awkward for me but "hey" some one's gotta promote those shoes)

The podcast is not just for guys -- the show is somewhat well balanced where ladies aren't completely grossed out by 2 strippers but feel as though they are getting great tips on how to be even more sexier... Out of the 2 hosts the blond is the most charming (hah! do blonde's really have more fun?)

But anywayz,,, I checked out the main website for the show: Vegas Undressed and was directed to this awesome site with other Sin City related podcasts (G Spot, That Show, and Vegas Cabbie)

Whooooohoooo party time for my ipod! :)

Check out a clip from the Stripper Method podcast:

Posted by Tameeka Time at 10:41 PM No comments: 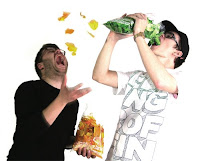 No matter what size people are
(fat/skinny/round/fleshy/
lanky/rawboned or bigboned)
we are all concerned about our weight and/or health.

Some of us try to eat healthy, join gyms or at least cut back on our alcohol intake....
Not anymore!!!
Just eat a bunch of flavored paper chips and you'll have no worries... 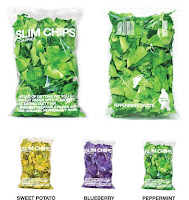 LOL!!!
Check out this product: "Slim Chips" it was created by an Icelandic designer named Hafsteinn Juliusson. He is also known for such products as "Growing Jewelry" 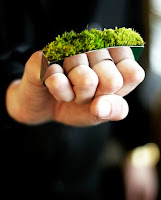 "Slim Chips are good and they contain no calories. Instead of getting fat you can now eat paper with different flavors (Sweet Potato, Blueberry, & Pepperment). It's like eating tasty air. The Slim Chips are made out of edible paper and pure organic tastes."

Check out the designers website and maybe you'll find a new diet or a new solution to your health problems........http://hafsteinnjuliusson.com/index.php?/projects/slim-chips/

*Remember I am not a professional - This is Tameeka Time not Doctor Time.
For any important health or medical issues - you should seek your doctor.
Posted by Tameeka Time at 12:47 PM 1 comment:

Your bringing what back??

Alrighty,,,,
Yesterday while transferring trains - I was very disturbed by a poster (see below) 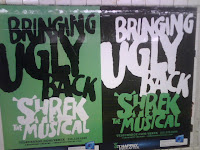 Email ThisBlogThis!Share to TwitterShare to FacebookShare to Pinterest
Labels: Not a Fan, Shrek The Musical, Why?

Sex (Ed) in the nail salon

One Sunday afternoon a dear friend and I decided to get manicures in a very
busy nail salon in Brooklyn (Kingston & Throop area).
It was cheap and it was fast....(ignore the sex reference I just made ^_^)
So...as Kelly soaked her lovely lady fingers she
turned to me and giggled..
I looked up at her and said "huh?"
She pointed and told me to read the paper underneath
the soaking bowl.
~Who knew we'd learn safe sex tips while getting mani/pedi's?!?!~
*Check out some of the poorly worded
health first tips from the paper under the soaking bowl* 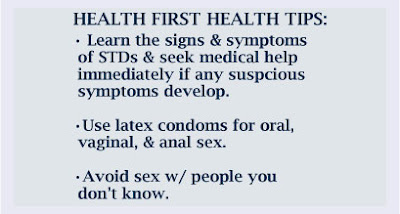 Posted by Tameeka Time at 12:58 PM No comments:

For almost a year now I've been apart of that online Blockbuster movie rental fad.

So every week I get to see a new movie :)

And I know there are haters out there that think Netflix is better,,,,

But!! With Netflix you do not have the flexibility of trading the mailed movie for another movie at a local blockbuster store for FREE!

This film was entertaining and informative.
I was constantly reminded that America is a fucked up place, big corporations just do not care about customers, and that immigration is still a huge problem. Great movie. I expected it to be more on the documentary end as opposed to a scripted movie with a huge top notch cast such as Bruce Willis, Wilmer Valderrama, Greg Kinnear, Luis Guzman, Patricia Arquette, Avril Lavigne, Ethan Hawke and many many more.

But overall I'd recommend this rental.

cat NOT in the hat 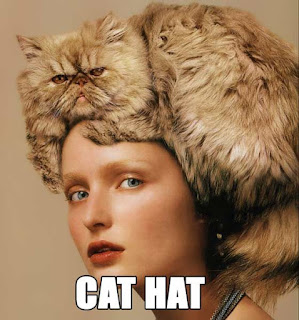 This pic was submitted by a faithful blog reader; VWalker (Check out her fabuloustity at: www.myspace.com/venitaw).
Thank you lady,,,I absolutely love this photo!
Really....what more can a girl ask for? Your cat as a hat!! ahh!

Why would anyone carry around a "foo-foo" little pooch when your snuggly, fluffy lil furball can keep you warm?
[source: http://www.missbehavemag.com/wp-content/uploads/cat-hat.jpg> ]

This automatically reminded me of a photo I took on 23rd street and 6th ave, nyc back in June. 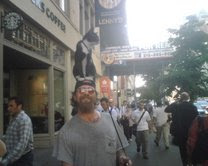 Which ones better? You decided blog readers! :).

Soooooo....one afternoon a fellow blogger (Candice of thehumansaredead.wordpress.com) and I were chatting and just looking through some sites and we often check out Gizmodo.com (http://gizmodo.com) b/c we are secret geeks for computer gadgets and we came across this pillow....

This "pillow" is called a light mate (I'd prefer a person but heyyyy ....who am I to judge?)
anywayz... Matt Buchanan reports that: "NightMates are "soft anthropomorphic pillows and warming lamps" that are supposed to keep you company (and comfy) at night. They come in different sizes, depending on how much anthropomorphic love you need..."

But I can definitely see the purpose of this product....this pillow is supposed to fill the void of the human absence and it even heats up like the human body..

(2) Do we really need to buy pillows that replace humans...human interaction is already dwindling..why keep it up?

But finally,,,,,I came to the conclusion that "light mate" looks sorta like a long string of poop (alien poop even)

hmmm...maybe I'm crazy but check out what some people said on the gizmodo site about the freaky pillow 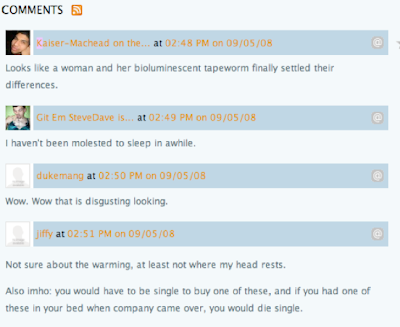 And check out Candice's blog!
http://thehumansaredead.wordpress.com
Posted by Tameeka Time at 11:26 AM No comments:

Email ThisBlogThis!Share to TwitterShare to FacebookShare to Pinterest
Labels: Freaky

Here's a very funny clip from my favorite podcast show "Keith & The Girl". They talk about Paris Hilton being made into a super hero...lol! The episode features: Keith Malley, Chemda Khalili, and Patrice (The gossip queen). Check it out! Funny Stuff!

Posted by Tameeka Time at 11:21 AM No comments:

Email ThisBlogThis!Share to TwitterShare to FacebookShare to Pinterest
Labels: Media

Cheaper than a condom

Statement of the day:

"In India its cheaper to have sex with a prostitute than it is to buy a condom." 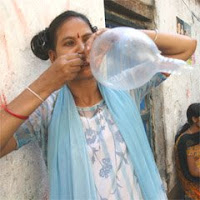 *I heard this on a radio show today - then I googled the statement and got 3,530 results stating the same thing whoooooa! (I'm not saying it's true but if it is...what a shame)

For more bizarre sex facts check out this site:
http://www.hometownmotocross.com/pages/sex_bizzare_facts.htm
Posted by Tameeka Time at 8:46 PM No comments:

Email ThisBlogThis!Share to TwitterShare to FacebookShare to Pinterest
Labels: Freaky 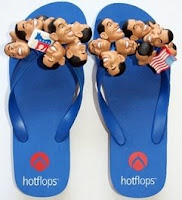 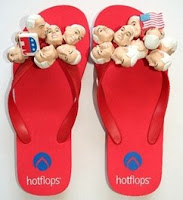 Hotflops.net are selling "election flip flops" for 30 bucks.
"Obama-flop" and "McCain-flop"
Double Eww...why would anyone want little plastic obama or mccain heads near your toes...bleuch!
I'd rather walk around with a teddy bear cell phone :)
or is it just me???
Posted by Tameeka Time at 2:01 PM No comments: 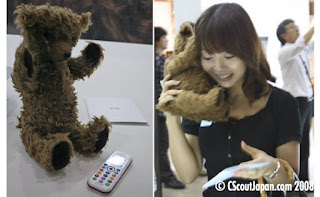 Ha! This is not your typical cuddly teddy bear! But it's a cell phone! This one is called the Kuma Phone (Bear Phone) - The item premiered at the 2008 Good Design Expo in Tokyo

The best part of this phone is that "You can save up to four speed dial numbers in the bear, one in each paw, which are activated by pinching internal sensors. It vibrates and makes custom noises for incoming calls, which can be answered and finished by pressing the tail."

For more fun check out this blog: http://www.kilian-nakamura.com/blog-english/
Posted by Tameeka Time at 12:58 PM 1 comment: