I hate crocs...and you should too

Ok.. many of you have seen people walking around with these funny looking plastic shoes with holes in them.
Don't get me wrong...wear whatever you want to wear but my question to those is: "why"?

Some people say that these slipper/shoe things are comfortable...but the truth is they are not!

And for those of you who do not know what crocs are look below:

Crocs are "started in 1999 as limited footwear in the US. Initially, the company targeted products to water sports enthusiasts, but the comfort and functionality of the products appealed to a more diverse group of consumers who used the footwear for a wide range of activities."

During the summer months, people walk around with these things like they are ready for water sports. They look ridiculous.

I was highly disturbed the other day when I was crusin' through blogs and saw these photos:

Who would wear these at their wedding??!?! omg! isn't your wedding day special? why ruin it? 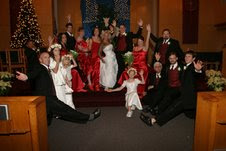 And to top things off....there are winter crocs :'( 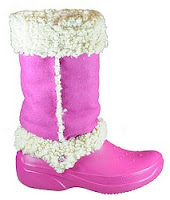 The good thing is while I continued my blog stroll, I discovered that I'm not the only person who hates crocs :) 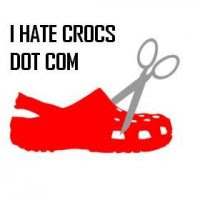 Posted by Tameeka Time at 8:29 PM No comments:

Hello all...check out this video featuring Sarah Palin (the governor of Alaska).
Keep an eye on the right side of this video. OMG the guy behind Palin (yes the one killing the turkey) is so camera shy. He can not even kill the delicious bird properly. Gosh Palin just move already.... The video description states:

A 2008 news story on KTUU channel 2 in Anchorage. Governor Sarah Palin is interviewed at a turkey farm while turkeys are slaughtered behind her.

Posted by Tameeka Time at 7:34 PM No comments:

This weekend I went to Red Lobster with a close friends and his kids.

I was reminded of a few things:

#1) OMG! Why is the wait always so long at the Red Lobster on 42nd Street Times Square?

#2) Is Red Lobster considered ghetto? I can't really say if it is?


Ok. I'm not trying to rate Red Lobster but I had to blog about an issue that came about while ordering food.

My friend was speaking to the waitress - placing an order for his kid from the kids menu - he was then told that fruit juice was an extra charge... we both looked at the waitress when she said this.
She re-capped that the kids meals only come with soda's.
Why would the entire drink menu for kids contain every soda in the world and virgin type mixed drinks....

The food comes, the kids are eating and my friend grabs a french fry from one of the kids' plates and omg the turned out to be some salty ass french fries... 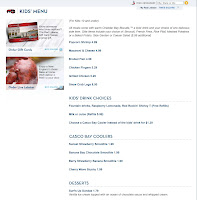 Posted by Tameeka Time at 11:56 PM No comments:

Hello blog readers.... Today is my birthday!
It's a super terrific day - I'm excited and giddy of course...
I'm celebrating with my family today and then with a few friends this Friday and Saturday.
Thank you all for the birthday wishes, they are greatly appreciated
:) 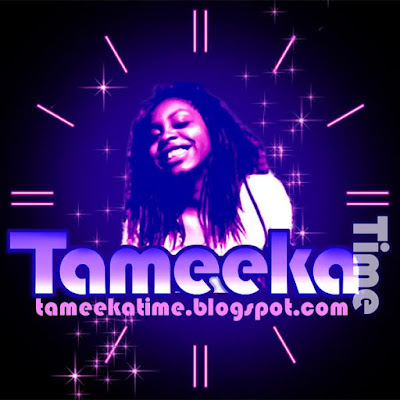 Posted by Tameeka Time at 11:59 PM No comments:

3 things that are wrong with this photo.... 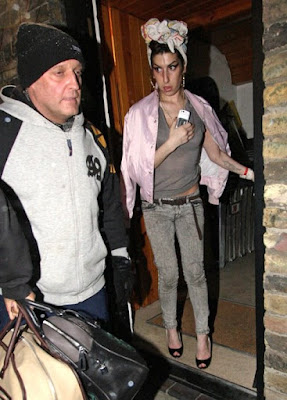 Response to: Beyonce are you losing it?

One of my blog readers emailed me a link to a youtube video in response
to my post titled: "Beyonce are you losing it?"...
It's a boy's response to Beyonce's song: "Single ladies (Put a ring on it)"

Posted by Tameeka Time at 2:50 PM No comments:

I was watching tv last night and this ad came on about "The Snuggies Blanket"
I giggled a little bit but after taking a few more looks at this blanket - I noticed that these things look like coats that strange freaky cult members would wear - it also reminds me of those monsters from M. Night Shyamalan's 2004 film; The Village
:/
See for yourself... 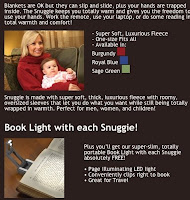 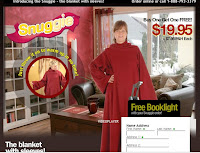 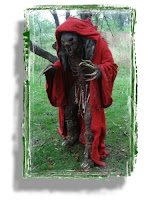 Posted by Tameeka Time at 10:01 PM No comments:

I just joined Twitter a few days ago ---
I do not see what's the hype's about -(?!?!)
maybe because a handful of my friends have joined - but wouldn't it be easier to update my status on Facebook or Myspace?

I'm going to stick with it for awhile and see if something magical will happen
:)
Posted by Tameeka Time at 11:49 PM No comments:

Beyonce... are you losing it?

I'm a fan of Beyonce and I have been for years.
But, as of recent I have not been enjoying her music...
she's a fashion diva, a good musician, and an
actress but I think she's losing her touch...

I was home cooking one afternoon and I had the radio on... I started to hear a song
about: "If I were a boy - I would turn off my phone - Tell everyone it’s broken -
So they’d think that I was sleepin’ alone "

Ok... I thought to myself - oh goodness this sounds like Beyonce ,, I hope this is not her...

So I turn up the radio and hear:
"If I were a boy - Even just for a day - I’d roll outta bed in the morning
And throw on what I wanted then go - Drink beer with the guys - And chase after girls"

Good God! It was her.

I get the concept of the song and how she wants to know what it's like not to care about what you wear or how it feels to ignore the person you love.

But singing about being a boy does not help unless we get technical and start talking about sex changes. ha!

Check out the video and song:

I can't believe my ears --- the one r&b artist that I still enjoy is starting to really suck so I go online and try to find other songs from this upcoming album of Beyonce's and I hear the song "Single Ladies" (Put a ring on it).

This song displays Beyonce's old club hit style but ,,,,, I don't like what she's saying in this song....

Just because you Beyonce got married - why do I have to demand some man to marry me - in the form of a song!

Lastly, a friend sent me a link to an article about Beyonce (because he knows I'm a fan).
The article was a review from New York Magazine about her upcoming album (which I was excited about).

The article talks about the album and how it's a 2 sided album displaying her two personalities (Beyonce and Sasha) Sasha Fierce is Beyonce's alter-ego. Lane Brown states that the upcoming album is sub par. :(

The good thing is that she looks amazing in her new videos and as usual
I love her dance moves, her sassy scene set-ups, and killer drag queens dancing
just as hard as her.

I still have hope that the album will be good and I also hope her decision to get married has not hindered her career
:-/

Posted by Tameeka Time at 11:41 PM No comments:

As everyone knows Barack Obama will be America's first African American president.
There are so many articles stating that the youth of America helped Obama win.
I'm very proud to be apart of a generation (The Y Generation) that helped create change. I am well aware that the world is filled with other African American leaders but this is significant to me. My generation is known for not having culture, not caring about anything, and for being brats.
But what's most important is that we are the generation of technology. And with this we helped transform America.

I was really surprised when I came across an article about an Iphone application based on Barack Obama's campaign.
Iphone applications are: "Web applications — or web apps — that combine the power of the Internet with the simplicity of Multi-Touch technology, all on a 3.5-inch screen."

When Obama was running for President people were able to keep track of the campaign at their fingertips.
In October, "the Barack Obama campaign released an official Iphone app. The app was developed by the iPhoneDevCamp and it is really full featured, especially for an app that was written in just one month and is being offered for free.

Overall this seems to be a great way to get some people into the campaign as it offers everything from calling options to news and videos to local events. Here is a list of the features:

Amazing! It's simply amazing.
Posted by Tameeka Time at 11:00 PM No comments:

Today a few co-workers and myself decided to have Shack Burgers from the Shake Shack for lunch.

The Shake Shack is a tiny lil restaurant in Madison Square Park in NYC serving hamburgers, hotdogs, fries, and milk shakes and for you vegetarians out there they have awesome shroom burgers :)

The lines are usually very long (a 30-45 minute wait) but these burgers are worth it.

Before you go out and stand on line you can check out the "live shack cam" and see how long the wait will be: http://www.shakeshacknyc.com/

Luckily,, today the line was short due to the rain.

I highly recommend every New Yorker to experience the Shake Shack....

Look at the pics I took while I waited in line for my cheeseburger and fries. 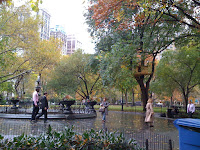 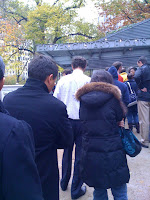 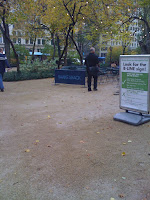