For the past few years ... the term crackhead has been used by almost everyone.

The definition of a crackhead is:

a habitual user of cocaine in the form of crack.

We even hear about crackheads from almost every black stand up comic.

I also have to admit that I've called a person or two a crackhead due to their jittery ways.

And I guess the term crackhead is more popular than I expected because the Osmanium Candy Company decided to name one of their products: "Crackheads" 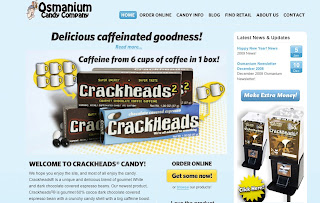 I know tons of people who can not live without coffee - but damn who really needs to eat a box of candy that equals 11 cans of Mountain Dew....barf!
Posted by Tameeka Time at 1:00 PM