Early this week I posted a heart felt letter to the man in the Slap Chop infomercial; Vince Shlomi.

Check it out if you haven't already: Letter To Slap Chop Vince

Well it seems that I was right in my letter b/c he is the lamest man ever! - he punched a prostitute.
It's reported that Vince paid a Miami prostitute $1000 for straight sex and that's not what he got!
The prostitute bit his tongue and he proceeded to punch her in the face. 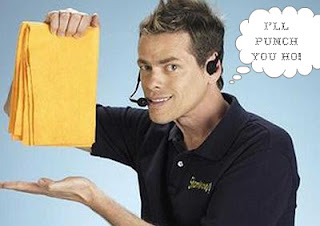 Dude,,,,,aren't you the "slap chop" man??? come on! one of those housewives watching your infomercials would bang you.

Stay away from the Ho's!

And that's what you get for telling people: "you'll like my nuts"