Earlier today, I started writing a blog post about a movie trailer and while I was writings and going back and forth checking twitter and facebook ,,, I realized that my movie trailer review would disappear in the many many posts about Michael Jackson's death. 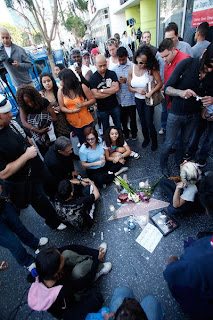 As the whole world may now know, Michael Jackson passed away yesterday. He was an amazing performer and an internationally known artist. He influenced a lot of today's musicians with his singing and dancing. I grew up listening to his music and I even enjoyed his last album "Invincible" released in 2001.

It's amazing how so many people are praising and celebrating his life. There's even Michael Jackson tribute parties happening tonight and over the weekend.

I just wonder how long this will last.

I've noticed that when celebrities pass away it seems like the internet explodes with information about this person.

I'm guessing that people will talk about MJ's death up until his funeral or until another big name dies.

People aren't twitterring about David Carradine (the guy from Kung-fu)? or even about actress Bea Arthur? And what about Farrah Fawcett? She died the same day as MJ.

I hope people continue to celebrate him, his legacy, and his music.

I also hope that even after all the dirty secrets of his life are soon revealed... his "fans" will still celebrate all the good things he's done.

(There was no video for it ... this is just the song over random images)

Email ThisBlogThis!Share to TwitterShare to FacebookShare to Pinterest
Labels: Celebrities