I hope everyone had a great week...

I had to end this week off with a trailer.

This one's from my Netflix queue.

Awhile ago I saw an article about the death of a man named Kenneth Pinyan.
The article just stated that Mr. Pinayn had sex with a horse and died. The article also discussed the controversy around the documentary made about him titled; "Zoo". 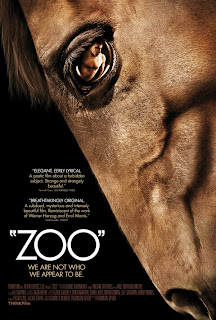 This article blew my mind because I've never heard about people having sex with horses and the term "Zoophilia".

So I started googling and seeing a bunch of "not right" things and all kinds of mammal on mammal intercourse. But I still didn't have a clear explanation on what this "zoophilia" was and why the hell would people do this.

I figured that this movie (being a documentary) would give me some insight on what's going on in people's minds when it comes to sexing animals.

So,,, last night I finally watched it and I'm still not 100% clear on the subject of zoophilia. I understand that I can research it but the filmmakers could have provided a lil more info.

The movie only spoke of horses and not other animals. And, it only spoke of men having sex with animals, there must be women doing this too.... it was wayyy too artsy and they didn't dig deeper into this man's life... what happened to his family? has anything like this happened since his death? arghhhh!

Well... here's the trailer.... check out the movie if your interested... if you do watch it or have seen it... let me know if you agree with me