Hello lovely people,,, I'm now back on track with my blogging and here are the Black Hair Word Search solution.

I've included brief descriptions of all of the words in puzzle for those who still wonder about black hair terms & a few YouTube videos to visual it. Hope this helps and informs. Also, be sure to share this post with all your lady friends. 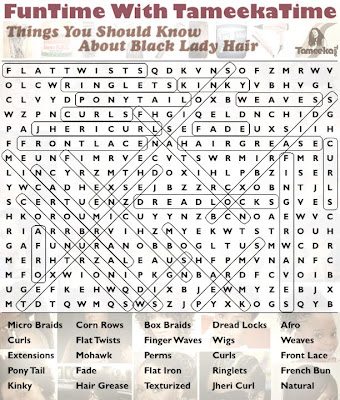 
-Curls: To Curl one's hair is to twist or roll into coils or ringlets. {How to curl your hair}


-Extensions: Extending one's hair is the method of adding commercial hair to natural hair. These methods are used to conceal thinning or hair loss in concentrated areas. {Adding extensions to your hair - yes white girls do it too}


-Pony tail: A ponytail is a hairstyle in which most or all of the hair on the head is pulled away from the face, gathered and secured at the back of the head with a hair tie, clip or similar device, and allowed to hang freely from that point. It gets its name from its resemblance to the tail of a horse or pony. {How to make a ponytail}


-Kinky: Also known as "Black hair", the term is used to refer to the typical texture of Black African hair that has not been altered by hot combs, flat irons, or chemicals (by perming, relaxing, straightening, bleaching or coloring). {Natural Kinky Hair}


-Corn Rows: a traditional style of hair grooming where the hair is braided very close to the scalp, using an underhand, upward motion to produce a continuous, raised row. And they are typically worn by either men or women. {Cornrow instructional video}


-Flat twists: Twists are a two-stranded hairstyle that can be achieved using natural hair or synthetic extensions. It may be done on short, medium or long hair. {How to do Flat Twists}

-Mohawk: In the most common variety, both sides of the head are shaved leaving a strip of noticeably longer hair in the center. {Cute braided Mohawk Style}


-Fade: Also known as a "flat top" is a type of very short hairstyle similar to the crew cut, with the exception that the hair on the top of the head is deliberately styled to stand up (typically no more than an inch) and is cut to be flat, resulting in a haircut that is square in shape. -- I couldn't find any females w/ fades except Grace Jones so I settled for this {funny lil video of a man w/ a flat top}


-Hair Grease: is hairdressing consisting of a perfumed oil or ointment. {Blue magic is talked about around 0:44}

-Box Braids: Box Braids is a type of hair extension, they consist of three-strand braids created by crossing opposing strands, one pair on top of the other. {Different Box Braid Styles}

-Finger Waves: is a method of setting hair into waves (curls) that was popular in the 1920s and 1930s and in the late 1990s in North America and Europe. The process involves pinching the hair between the fingers and combing the hair in alternating directions to make a wave shape. {Finger wavin'}


-Perms: is the chemical and/or thermal treatment of hair to produce waves, curls or straight hair. {Great vid on perming hair}


-Flat Iron: is a tool used to change the structure of the hair with the help of heat. {Flat Ironing your hair}


-Dread locks: are heavy matted coils of hair which form by themselves eventually fusing together to form a single dread. This is possible in all hair types if the hair is allowed to grow naturally without grooming or conditioning for a long period of time. {How to dread your hair}


-Wigs: are a head of hair made from horsehair, human hair, wool, feathers, buffalo hair, or synthetic, worn on the head for fashion or various other aesthetic and stylistic reasons, including cultural and religious observance. The word wig is short for periwig and first appeared in the English language around 1675. {Putting on wigs}

-Ringlets: is a type of hairstyle. It is achieved by wrapping a lock of hair around the length of a thin curling iron or can be sported naturally by people with sufficiently tightly curled hair. Ringlets are often also known as tube curls. {How to make ringlet curls}


-Jheri Curl: the Jheri curl is a glossy, loosely curled look. It was touted as a "wash and wear" style that was easier to care for than the other popular chemical treatment of the day. Did you know Michael Jackson wore a jheri curl? {Male Jheri Curl Tutorial}


-Afro: sometimes shortened to "fro", is a hairstyle in which the hair extends out from the head like a halo, cloud or ball. {Natural Fro}


-Front lace: is the most recent development in weaving extensions. They are made from a nylon mesh material formed into a cap that is then hand ventilated by knotting single strands of hair into the tiny openings of the capform, giving the hair a more natural, realistic flow than conventional extensions, and creating a lighter, more breathable cap. {Front Lace Instructional Video}

-French Bun: Similar to a pony tail but the hair is not loose, it's tucked in. {French Bun}

*If you haven't completed the puzzle yet & would like to try it out go here: Tameeka Time's Black Lady Hair Word Search