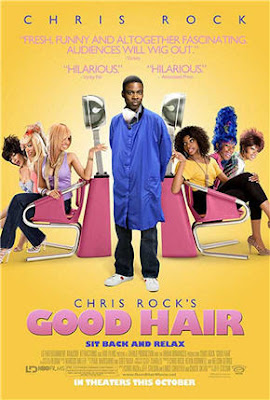 I finally made time and went to the 34th Street AMC Loews Theater and watched Chris Rock's documentary Good Hair.

I was pleasantly surprised by the crowd that was viewing the film. It was a mixed bag of Whites, Blacks, and Asians.

I was also pleasantly surprised by the film itself. I liked the film for what it was. I'm glad that Chris Rock is trying to inform people about black hair since it is a topic/issue in every black woman's life.

I did leave the theater thinking about my own hair situation, which means Chris Rock did something right. A well produced documentary should make the viewers (or at least one viewer) think about their own situation and how they can relate to the film.

There were a few aspects of the film that I did like and some that I felt were not necessary (or it's role could have been shortened in the film).

Such as the topic of "natural hair". Rock spoke about every type of weave, perms, wigs, and styles but he didn't inform people that not all women have to perm their hair or wear wings. People should know that there are alternatives.

There were scenes of Rock interviewing women in various salons getting their hair weaved, braided, and permed. I would have liked him to ask every woman "why don't you just go natural and leave the "creamy crack" (perm) alone." The topic was bought up but not discussed heavily, I think that would have made for some great on screen conversations amongst the women.

The film was heavily casted with B & C list celebrities (and maybe an A list celeb or two). But to me that added a bit of charm to the documentary. I think it helped the female audience relate to their favorite r&b singer or black actress.

I was surprised to see rapper/actor Ice-T in this doc. I forgot that he was always known for his luxurious pimp like style. He surely added a masculine touch to the interview portion.

Everyone gave good, light hearted, even humorous interviews. The only one that bothered me was Raven Symone (Olivia from The Cosby Show). She was a bit awkward and came off a little too obsessed with her weaves and when Chris Rock asked her about starting her own line of hair, she responded like she was making a joke but being half serious, it was just weird.

As for the "hair show portion" of the film, it was well spread out but it played a bigger role than it should have especially in a film about "good hair". The characters that were followed didn't even talk about what "good hair" meant to them, they were just worried about their performance in the hair show not how their models hair styles looked. So that was a bit odd to me.

There were two things that I learned from this film. I did not know that women were allowing their 3-year old daughters to get their hair permed.

That's insane. I was shocked when Chris Rock was talking to little girls and they were taught to think that perming your hair is what you are supposed to do. I also learned that Indian hair is a huge commodity amongst black people. I did know that women were purchasing and wearing Indian hair but I just didn't know it was so expensive and in such demand. There are even stories of a young Indian girls getting their hair stolen off of their heads (in India not America).

Over all, I think this documentary is worth seeing. Everyone can learn about the "black hair struggle".

I am not too fond of Rock's comedy (especially in this film) but he did make a great point that "what's on the inside is what really matters."

**If I happened to convince you to see this film and you haven't watched the trailer yet, check it out here.
Posted by Tameeka Time at 1:02 AM