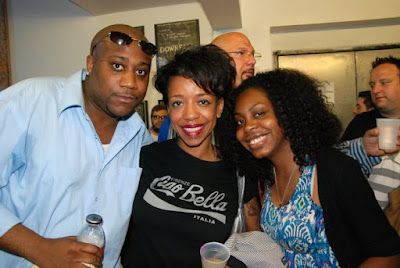 Back in April I was introduced to a filmmaker named Celia Peters.

I played the role as editor for what Celia shot.

The video I put together is titled "Editing Uptown". It's basically a peak into why the director Brian Ackley picked certain shots and what trials and tribulations the editor Daniel Green went through with putting the film together.

You can see Celia Peters in the picture above with myself and Uptown's producer Princeton Holt. We were celebrating the movie's New York City Premiere back in June. It was held at the Anthology Film Archives.

The film Uptown is about two characters named Ben and Isabel who fall in love but the the twist is that Isabel is married. Check out the trailer ....

If your interested in viewing Uptown and viewing the Behind The Scenes video I edited you can purchase the dvd on July 20th. The film has been picked up for multi-platform distribution!

It's available for pre-order at Walmart.com , Bestbuy.com , Blockbuster.com , and Borders.com

I'm really glad to have been apart of this great project.
Posted by Tameeka Time at 6:22 AM