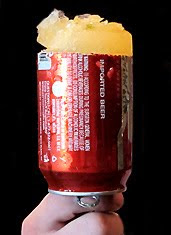 The other day I was reading up on Urbandaddy.com and there was a featured article on something called: Beer Popsicles

Instantly I wanted to know what this was all about....

Last week a Mexican Saloon by the name of Diablo Royale Este on East 12th street in New York city launched what is called "The Hopsicle Experience", it's a frozen can of beer, sliced in half and served like a Push Pop for big kids, launching today at Diablo Royale Este.