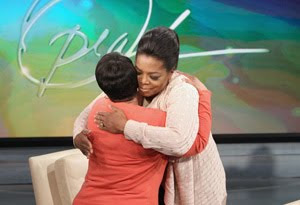 Most of the general public tuned into (or heard about) Oprah Winfrey's "family secret".

Last October, Oprah Winfrey discovered that she had a half sister named Patricia.

Oprah's mother says she gave Patricia up for adoption because she just could not take care of her.

This morning, a friend asked me; "What would you do if you discovered you had a sister?"

I did not have an immediate reaction to the question, I had to think about it.
I jokingly yelled out "Ahhh I don't know what I'd do!"

But after thinking about it for a bit, I'd try and enjoy the situation and make the best of it.

My parents only had one child (me).

I would have so many questions for them. I would also wonder how this discovery would affect their relationship. They have been married for many years and I wonder how this person would interact with parents that did not raise them.

On my end of things, I would want to get to know everything about this person, I'd especially want to see if we would be similar in any way or if we could even exist as "siblings" or would we be "just friends."

So my answer is I'd welcome the idea of having a half sister.
Posted by Tameeka Time at 8:23 AM