Today was a really lazy sunday for me and I liked it!

I took care of things at home, I actually got a chance to nap, I watched two movies, and went for a stroll in my new neighborhood.

There's a little pet shop that I've never noticed near Northern Boulverard. I decided to go in and have a look.

The entire first floor of the pet shop was filled with fish tanks. The blood parrot fish tank was one of the most  interesting. The shop named these fish "Heart Shaped Parrot Fish", they were not so heart shaped in my opinion but they were all a deep red color so I could see where they were going with this description. 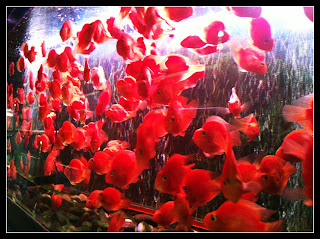 I've never heard of the Blood parrot cichlid so I looked it up and here's some info on the fish species above. Apparently these little guys are pretty controversial since they are a man made hybrid and people have been dying these poor guys.
The Blood Parrot Cichlid is a hybrid fish that was first created in Taiwan in the mid to late 1980's. Blood Parrots have a round body, a beak shaped head with an upside down triangle mouth. They are often seen in bright orange in coloration, but seen in other colors such as red, yellow, brown, and tan. Other colors have been produced such as green, blue, and purple by dyeing the fish, which shortens life expectancy. (source#1)(source#2)