11 years ago my life was so different. I was a senior at Murry Bergtraum High School. I can't remember how many classes I was taking at the time, but I do remember having a 1st and 2nd period class. On 9.11.01, I remember getting dressed and putting on my new boots, they had really high heels. Before leaving I thought "not today... today I'll just wear my new sneakers." After changing, I was late (of course) for my 1st period class so I took my time heading to the city.

I lived in Brooklyn at the time and Bergtraum was located in downtown Manhattan (Pearl Street to be exact). I took the Manhattan-bound A train to Broadway Nassau walked upstairs and I saw smoke coming from the towers. That was strange. Plus there was a crowd around the buildings but no one was in a panic, everyone was just looking up at the building.

I had enough time to stop and grab breakfast so I went to this little deli right near the train station, I did what I usually do and ordered a bacon, egg, and cheese on a roll. I asked the guy behind the counter "What's going on?" He said "I hear there's a fire on top of the world trade center". I said "oh that's horrible" and I got my sandwich and proceeded to walk to school. Because I was late, I didn't hear the full story of what happened to the first tower. I just went along with what the deli guy said about there being a fire. I would never think a plane hit the building.

To get a sense of where Murry Bergtraum was located compared to The World Trade Center take a look at the photo below (the distance is 0.8 miles / 15-16 minute walk). 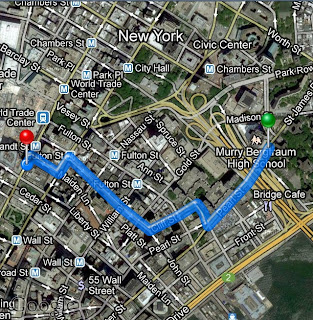 Once I arrived at school, I went to the Student Government office. I was the Treasurer at the time. I watched a bit of the news and saw the top of the building burning but realized I would be late for my 2nd period class so I scurried out of the office.

I arrived at my computer science class on time and we were all getting settled when our principle made an announcement. She said "a plane has hit the world trade center, please remain calm". I'm sure she said much more after that but I can not remember because I began to panic. I just remember putting my things away and leaving class. I'm not even sure if people followed me out of the class, I just knew I needed to leave at that moment. I was on the same floor as my two close friends. I busted into their classroom, looked straight at the two girls and told them "We have to go!!". I remember the teacher yelling at me, telling me to get out of her class. Her words didn't phase me because I was determined to get my friends and leave.

Once out of the building there were other teachers instructing us to head towards China Town. I was at a lost of words and didn't know what to do. I lived in Brooklyn and the only way I would get home was by taking the A train (which was back by the world trade center). I then started hearing people say "don't go over the bridge, there are threats of them blowing it up", "the trains are not running in any location". I remember standing with my two friends and thinking "what do we do now, where do we go?". Good thing I wore my sneakers.

All cell phone service was blocked. It was mayhem around us. Our school was across the street from One Police Plaza (the headquarters for the NYC police department). The sound of the sirens and the sight of what seemed to be every police officer from the headquarters in the street caused even more panic.

No one knew what was going on. All we kept hearing was "there's a terrorist attack against New York."

At this point, we are now standing in front of the school looking at the towers. All I could see were papers flying from the buildings and fire. Lot's of fire on top of the towers.

I no longer wanted to stand still and watch the buildings burn. My two friends and I started walking towards China Town. It was our only option since the trains weren't working and the bridges were going to be "blown up."

As we walked, I remember crying and one of my friends crying as well because we didn't know what to do, or where our families were. We were stranded in our own city. I couldn't call my mother to see if she was at work already. I couldn't call my dad. The pay phones were not working either. I felt helpless and continued to cry and we just started walking uptown.

While we were walking further away from the towers, we occasionally looked back. And the final time I looked one of my friends quickly turned me around and said "don't look, the buildings are falling --- don't look." We scurried into a diner and a very old man behind the counter said "they hit the white house too." That was it! We knew all of America was in trouble then. What the man meant was the Pentagon was hit.

My next thought was to just take my friends and head to my mothers job. My mom used to work at The  New School University located near Union Square. I've taken my friends to my mothers job a few times so we all knew the distance and agreed that walking there would be a good plan.

The streets were filled with people walking away from the towers. Along the way, we bumped into another good friend of ours and she ended up finding her sister in the crowd after spotting us - it was a weird but delightful surprise. We all shared a good cry.

Once I reached my mother she was beyond relieved to see me safe and unharmed. We were safe with my mother and her co-workers but still stranded in Manhattan. My mom took care of us for a few hours while the city settled and the trains began to run again. We were very shaken and very grateful for my mothers love and her co-workers kind words.

Later that day my mother and I got on the train and headed home to Brooklyn. When we reached our block, kids were playing basketball, hanging out, and riding bikes. I was clearly shaken up because all of these normal activities seemed so strange to me at this time.

The next few days, I stayed home, talked with friends who all had different stories of that day, and tried to get back to normal. Our school was closed for a few days because of it's location but the time off was well deserved after being so shaken up. 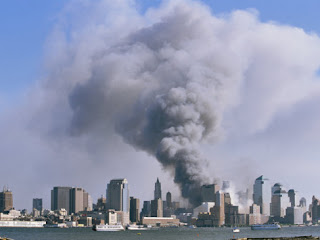