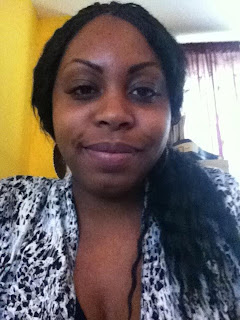 The other day I went to a threading salon that I've had an on-and-off relationship with for years.

I only go to threading salons to get my eyebrows shaped and cleaned up.
On Tuesday, I walked out of the salon with red, watery eyes. I looked a mess but my eyebrows were shaped pretty good. This threading salon I'm talking about is located a block away from where I work, the staff is very friendly, the prices are reasonable, and the service is great.

You may be thinking, "so why does she have an on-and-off relationship with this salon?"

It's a great question actually. I hate (yes I used the word hate) I hate the feeling of my eyebrows being threaded. I can deal with the one swipe pain of waxing. But threading is tedious and the threader always seems to want to take every little single hair from your brow area. When ever I find myself in a rush and need my brows shaped for an event I always run to this salon because they open early and close late. But I'm writing this more to remind myself to stop going there and to share my thoughts on eyebrow threading. During my last threading session I simply wanted to cry like a baby. I also wanted to sob and scream out "STOP"!!  But I controlled my inner child and realized that I'm an adult. That would just be a ridiculous way of behaving. So I took it. I took the pain and made a mental note (yet again) to stop going the threading route and just make time to get my brows waxed. nDon't get me wrong, I do understand the saying "with beauty comes pain" but holy cow it's painful. I will not step foot in a threading salon for a very long time.

After searching eyebrow threading videos on youtube this video is the best example of how I felt in the chair getting my brows threaded on Tuesday. 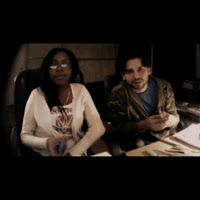 For years I've worked on videos with and for visual artist CortesNyc.

Recently we've teamed up again to work on an extension of his popular youtube channel. The extension will include Cortes live streaming art sessions and I will be moderating. The show is titled; CortesNyc's Art Studio Live. 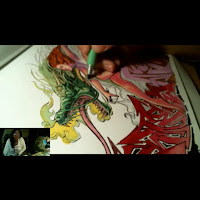 I will put my chatty / vlogger skills to use by moderating the show's live chatroom while Cortes draws, answers questions, gives tips, and demonstrates different art techniques. The first 2 episodes were pretty fun to be apart of technically. I was switching between multiple cameras and reading comments/questions out-loud for the viewers. This is a great experience since I've never produced a live broadcast show online before.

If you want to get a feel of what our first 2 episodes were like, we put together this reel for you to see! And if you like what you see and want to join in on the fun join us tonight (January 30th, 2013) at 8:30pm EST on livestream.com.


{CLICK HERE TO WATCH THE VIDEO}
Posted by Tameeka Time at 2:28 AM No comments: 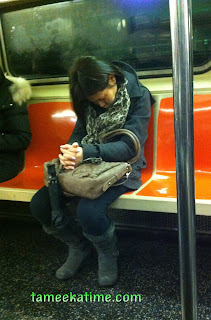 If my train wasn't delayed this morning I would be doing the same thing. I'm not mad at ya!  This morning was a tough commute on the train. Sick passengers. Train delays. With a dash of snow. What else can you do but sleep.

Happy Monday!
Posted by Tameeka Time at 8:01 AM No comments:

It's really really cold in New York City and people can't seem to get over it.
Here's a screen grab from the weather app on my iPhone.

Yes, today is Friday and the current temperature where I am is 12 degrees Fahrenheit and the highest temperature it will go up to is 28 degrees.

I guess this explains why Kanye West was spotted wearing this cut up ski mask below. 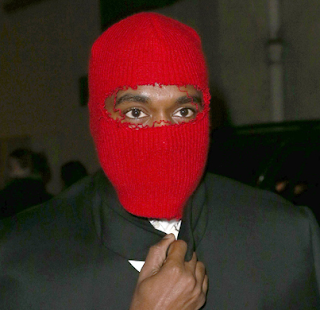 Even though Kanye was seen wearing this ski mask going into a fashion show in Paris on Wednesday this outfit choice made me google the weather in Paris and it seems to be just as cold as it is here as it is there. 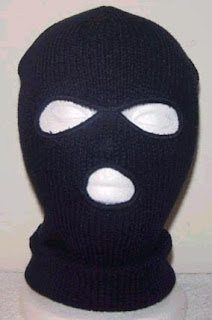 At first I judged him..... but now I get it! Right on Kanye .. Right on. Look as crazy as you want as long as your face stays warm, I'm all for it. Today my scarf did not match my jacket and I'm okay with that. I'm just not sure why Kanye didn't get a nicer ski mask. Maybe one with diamonds on it. And don't ski masks usually have an opening for the mouth. Hmmm. 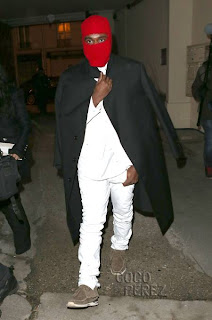 Here's Kanye's full outfit just in case you'd like to see it. I do wish his sneakers were red to match the ski mask but who am I to judge his fashion choices.


And while we are on the topic of fashion choices and keeping warm, this showed up on my news feed this morning. I guess this is an effective way to keep your man parts warm fellas.

It's the grey shorts sweater trousers. I'm guessing this will make the perfect Valentines Day gift for some lucky man out there. I have no words for this. And yes this is a real item for sale on Etsy. 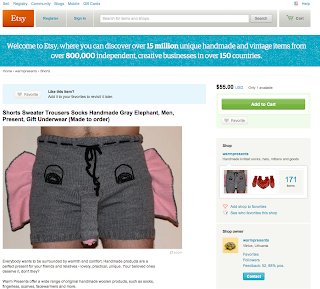 Posted by Tameeka Time at 8:59 AM No comments:

I see this guy here enjoyed the Golden Globes way too much.

Not sure why he's protecting his junk... but I guess that's what you gotta do when your napping on the train. 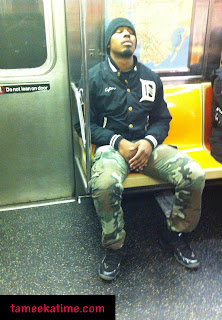 Muahz!
Posted by Tameeka Time at 8:09 AM No comments: 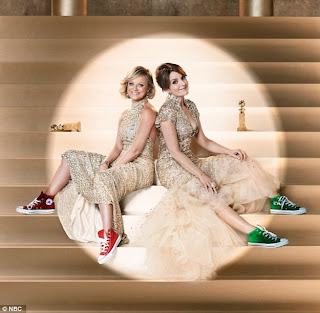 If you are brave enough to play a drinking game during the award show, try this one by my favorite Parks and Recreation member Amy Poehler and Tina Fey.

Also, here's a list of tonight's nominations {2013 Golden Globe Nomations}- who are you voting for? Comment below what your predictions are.


Source: Buzzfeed
Posted by Tameeka Time at 12:00 PM No comments:

Beyonce is winning 2013 so far

Beyoncé is winning 2013 so far (and it just started). It seems like every week she's being featured on some site or sporting some hot outfit on her Instagram page.

Back in October (2012) it was announced that Beyoncé would be the half-time performer during this years Superbowl. I'm super excited to see her perform! I always look forward to the wings and chili during the Super Bowl but this year I could care less about who's playing or what I'm eating. I get to see Beyoncé kill it. 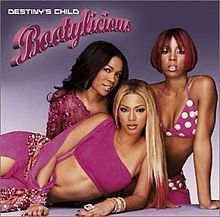 Yesterday  I came across a bunch of posts confirming the reunion of Destiny's Child at the Superbowl. Destiny's Child is one of my favorite 90s girl groups (the Spice Girls will always be number one in my heart) but I got pretty pumped about this reunion just because it reminds me of my junior/high school years. A recent post on Beyoncé's main website speaks of a new DC album being released. The album will be a compilation of the groups greatest love songs and one new track titled; Nuclear. I hope the group stays together and is able to release a full album of new songs in the future. But I'll take what I can get for now.

After the Superbowl buzz, the media and bloggers will still be talking about Bey once her HBO documentary "Life is but a Dream" airs on February 16th. In the trailer Beyoncé talks about her pregnancy and how hard it is to stay relevant. I will definitely be watching and I love the vlogger aspect of her videos (talking to camera alone style). 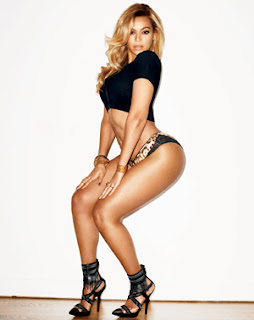 I've always been a fan of Beyoncé. I'm not a stan. But I do like her music (don't judge me) and I think she's always had an amazing body. This week the Internet was abuzz about her "racy" photos in the February edition of GQ. Coincidentally,  these photos were released the same week of her daughter; Blue Ivy's first birthday. Yes the photos are clearly saying "look how hot I look a year after giving birth to my daughter."

I say more power to her. If I decide to have children I already know that I will be taking all of the boot camp classes my local gym will offer to get my body back in shape.

The day the GQ photos were leaked both males and females on various social media sites could not stop talking about how good or how fake she looked. I've even seen females imitate her cover pose. I have heard many people comment that her body is fake and she only looks like that because she has a personal trainer living in her home, a personal chef, and world class surgeons accessible to her. This all may be very true (I guess). Beyoncé has denied the above rumors. But if I had the money she had I would do the same thing and half the people on the Internet saying negative things would too.

What's so wrong with getting back to shape?

What are your thoughts? If you had the money and the resources Beyoncé has would you have a live-in chef, personal trainer, etc.

I'd like to hear from the Beyoncé lovers and even the haters ;)
Posted by Tameeka Time at 11:47 PM 2 comments:

Email ThisBlogThis!Share to TwitterShare to FacebookShare to Pinterest
Labels: Beyonce, Beyoncé, beyonce at the superbowl, beyonce is winning 2013, beyonce on the cover of GQ, blue ivy, Celebrities, Destiny's Child reunion, HBO, life is a dream documentary, My Music Obsession

These folks right here are getting some good sleep before they head into work. I tried closing my eyes after getting this pic but I just couldn't fall asleep. 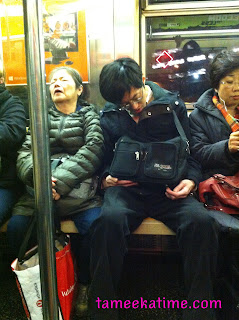 Posted by Tameeka Time at 8:13 AM No comments: