Last night, while I was catching up on the season finale's of Scandal and Revenge I scrolled through my twitter feed and saw someone tweet about Miguel drop-kicking a girl at the Billboard Music Awards. I ignored the tweets and didn't think too much of it until I saw this in the morning:

I can not stop laughing and I know it's wrong but damn.... this looks like it should have been apart of a WWE match. I hope those young ladies weren't injured too bad and I hope they get to see a good chiropractor today. The worst part of this whole fiasco is .... Miguel did not plan this jump.

Here's the proof, look at his twitter feed where he mentions getting caught up in the moment. That doesn't sound like a planned jump to me. Does he think he's Usher or NeYo? Miguel needs to take a seat in the corner somewhere and stop landing ass first on girls.

"@MiguelUnlimited got caught up in the moment, thank goodness Khyati is okay #BBMA " 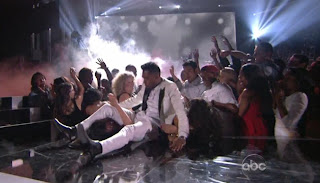 Damn Miguel I guess you won't be jumping off of stages any time soon. 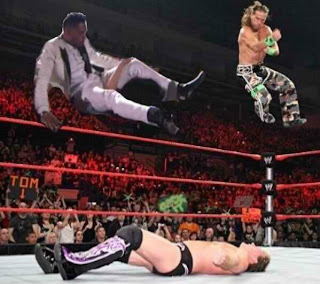 Posted by Tameeka Time at 2:25 PM No comments: